An association between THA metal bearings and cardiotoxicity has been observed by several groups. In their investigations, Wyles et al. (2017) and Swiatkotwska et al. (2018) found out that heart failures were associated with exposure of metal ions and raised concerns about the toxicity of metal bearings.

Associations between cobalt depositions in the cardiac tissue and cardiac fibrosis and cardiomegaly were demonstrated by Wyles et al. They found a moderate correlation between cardiac cobalt levels and cumulative implant years. Moreover, higher cobalt levels were measured in patients that underwent revision surgery or in patients that had a hip replacement combined with a total knee or shoulder replacement. The authors suggest an association between the accumulation of metal toxins generated by CoCr implant components in a distant organ and systemic long-term complications on the patients. This research work can serve as the basis for further studies investigating the safety of CoCr components used in orthopaedic clinical practice. 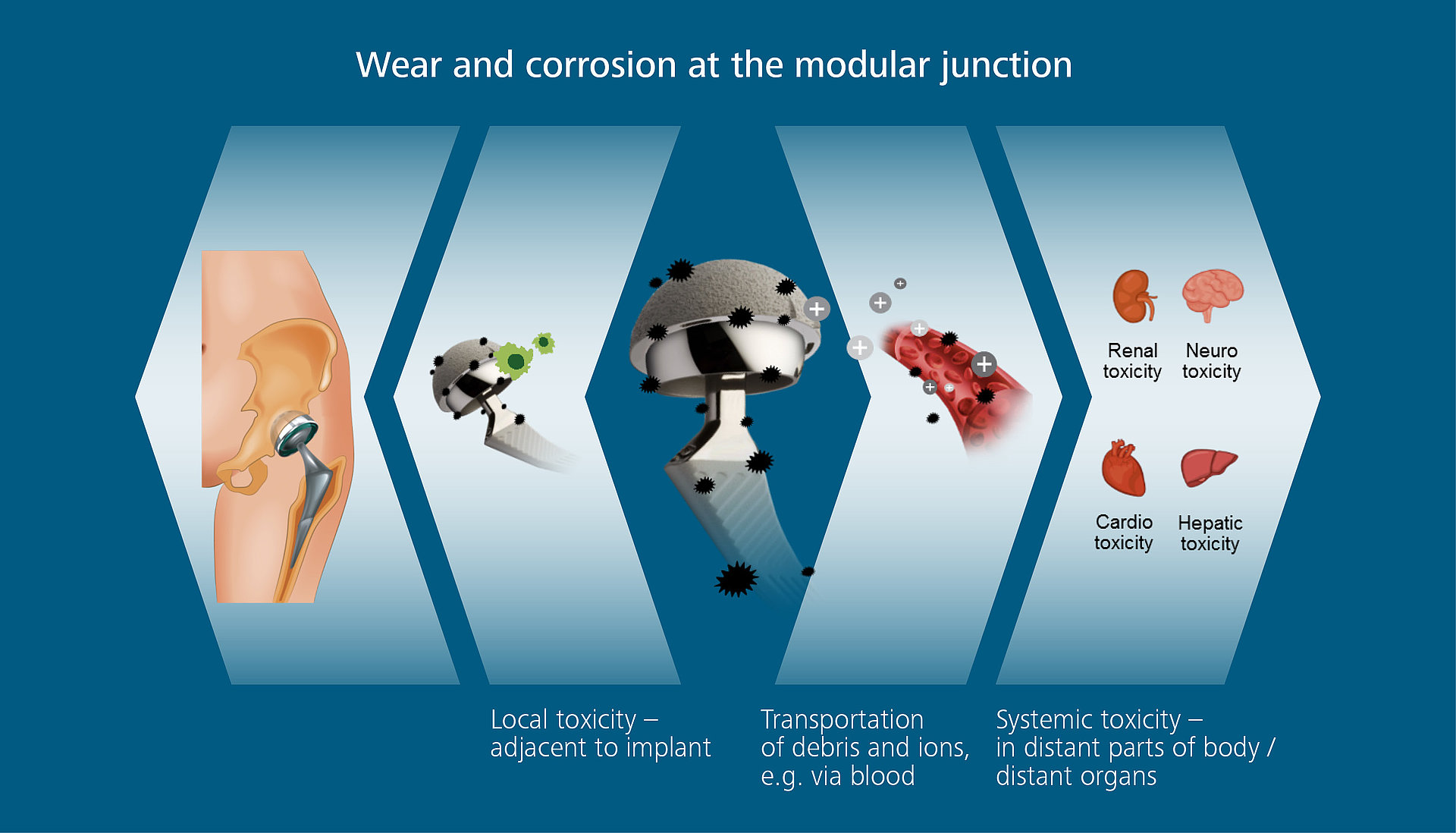 The major finding of the study was that carcinogenic forms of chromium might arise in vital organs of THA patients. The hexavalent oxidation state of chromium (CrVI) is the most harmful state, however it is very unlikely that CrVI species originate directly from the implant. Instead, the re-oxidation of trivalent chromium (CrIII) released by metal bearings to carcinogenic CrVI species may be possible. Under pathological, but also normal conditions cells may generate oxidants. It follows that the oxidation of trivalent chromium to its carcinogenic valence state may be promoted by elevated levels of biological oxidants in the blood.

The presence of cobalt in tissues from MoP patients resulted to be only mildly elevated, although several patients showed cardiomegaly or severe interstitial fibrosis.

Interestingly, titanium oxide was also found within the tissue samples, nevertheless it could have originated from other external sources as it is commonly used in food and personal care products, as well as being present in ambient air.

These findings with limited evidence were confirmed recently by a large epidemiological study performed by Lassalle et al. (2018). The analysis of the French Health Authorities ANSM database (255.350 hip patients) revealed a higher risk for heart failure and cardiomyopathy in patients with metal bearings compared to patients with ceramic bearings. A further increased risk has been identified for women and older patients (≥ 75 years).

The authors recommend to monitor regularly the cardiac function in patients with metallic bearings.

Download the full article “ANSM: Cardiac function to be monitored in patients with metallic heads” as PDF.